QI-0 Re-Launch of the QI Podcast

Welcome to the re-launch of the Quiet Innovation podcast, the show that’s all about Great Ideas Hiding in Plain Sight. 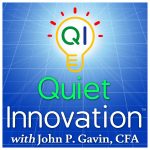 To re-introduce the show, today I start by asking this question:  What do an industrial floor cleaning machine, a sewer system, and solar panels you see on top of roofs have in common?

What the show is about —

Every day, all around the world, people, companies, and organizations of all kinds are come up with cool and innovative ways to do things. As a professional investor and entrepreneur, I regularly gain inspiration from the many innovations I’ve come across through the years.

Most of don’t make the headlines but they do make a difference   They are great ideas hiding in plain sight.

I love finding and telling other people about them.  On this podcast you’ll get to hear about these innovations, and sometimes the stories behind them.

We’ll both learn about new things we might not otherwise hear about.  Hopefully, we’ll both be encouraged and inspired along the way.

Again, welcome to the re-launch of the QI podcast.

Make it a Habit to Under-Promise and Over-Deliver

One of the most upsetting things we experience, all too often it seems, is when someone promises to do something for us and then fails to meets the expectations they helped set.  This is true whether in our business or personal lives.  It business, it happens when someone either delivers below the standard you expected, is late, or both.  That’s what we’ll talk about here.

Disappointment is usually followed by trust eroded, especially if the person making the promises develops a track record for consistently failing to deliver as promised.  Nothing can derail a promising career, or getting someone to believe in you, than becoming the person who over-promises and under-delivers.

The problem you have to overcome is that promises made feel good in the moment.  Who doesn’t like talk of grand visions, problems solved, and all the money to be made, right?  Conversely, telling someone something they may not want to hear is much harder.

Think of adopting a cute little puppy.  The proverbial brochure focuses on how cute it is and all the fun times you’re going to have together. What fun!

But who would adopt that cute puppy if they told you it was also going to poop all over your house, chew everything in sight, cost a lot of money to take care of, and only after years of a bonded love, will almost certainly die before you do, breaking your heart?

Seasoned pet owners know what they are getting into when adopting a new animal.  So too do people realize that nothing is free, quality takes time, and it’s less costly to get it right the first time than to make amends later.  We’d much rather have someone tell us a goal and then beat it rather than raise our expectations and only offer excuses when they are missed.

Your take away from this is simple:  Get into the habit of under-promising and over-delivering.  If you know are confident you can have something to a client by next Tuesday, promise delivery for Friday instead.  That way if something goes wrong you have a cushion to still deliver to the expectation you set.  Trust me on this, things go wrong far more than we think.

What’s this look like in reality?  That project you thought you could have to your customer/client by next Friday actually took until Wednesday because your computer developed a virus and the writing took longer than you first expected.

But you sent the completed work on Thursday, a day before you promised.  Rather than offer your sob stories and excuses for what went wrong, you instead delighted the person who wasn’t expecting delivery until Friday.

Under-promising and over-delivering.  It’s not glamorous sounding.  But it can do wonders for a career, relationships, and for turning your great ideas into reality.

QI-013: What it Really Takes to Get Money for Your Startup | Angel Investor & Serial Entrepreneur David S. Rose

David S. Rose, Founder and CEO of Gust.com joins me today to discuss raising capital for your startup.  Gust is a global collaboration platform for early stage angel investing, connecting hundreds of thousands of entrepreneurs and investors in over 75 countries.  This is an interview rich with insight, expertise, and rock-solid advice for helping you turn your great idea into reality.  It is truly a delight to have David come on my show today and I think you will agree.

In addition his role at Gust.com, David is Managing Principal of Rose Tech Ventures, one of the country’s leading seed stage investors and he is Founder and Chairman Emeritus of New York Angels, the world’s most active angel investment group.  In addition, he is Associate Founder, and Founding Track Chair for Finance and Entrepreneurship, at Singularity University, the Google/NASA sponsored graduate program training the next generation of technology leaders.

David S. Rose, described by BusinessWeek as a “world conquering entrepreneur” and by Forbes as “New York’s Archangel”, is a technology visionary and investor who has founded or funded over 85 pioneering companies that are helping to define the future.  An Inc. 500 CEO and industry thought leader, he is a dynamic keynote speaker on the topics of future technology, venture investing, entrepreneurship, and presentation skills.

As you listen to the podcast consider the following: No matter how brilliant your ideas are there are potentially hundreds of people out there with the same exact idea. As David explains, that is why investors don’t fund ideas. Ideas, sometimes referred to as "vision" goes no where without good execution.

In today’s episode you will learn about:

END_OF_DOCUMENT_TOKEN_TO_BE_REPLACED

Today I am joined by prominent angel investor, Brian S. Cohen, the first investor in Pinterest, chairman of New York Angels, and the author of “What Every Angel Investor Wants You to Know: An Insider Reveals How To Get Smart Funding For Your Billion-Dollar Idea."

So you have a great idea, your research, your trusted friends and advisors all say you’re onto something.  But you need money.  Ah, yes, money.  So many great ideas need money to help you turn them into reality.

To help you learn more about ways you can get money for your great idea, last week I attended the GUST Venture Forward Conference.  This was a one day event where angel investors got together with other angel investors to talk about trends, ideas, deals, and of course, you!.

It was while I was in New York that I had the chance to sit down with Brian to get his refreshing take on angel investing.  Over the past decade, Brian estimates he has considered more than 1,000 pitches for startups.  Again, he is also the first investor in Pinterest.

New York Angels, the group of which Brian is chairman, is comprised of over 100 members.  This group leads deals ranging from $100,000–$1.0 million. With a sizable network of angel groups and venture capital firms, they can syndicate to do deals up to $2 million. The New York Angels has invested over $45 million in more than 70 venture companies.

In his new book, which you need to get if you’re serious about raising capital for your great idea, Brian outlines the things that irritate him most when entrepreneurs are pitching for his investment.  We get into that in today's interview, including Brian’s belief that connecting with the right angel investor is like finding a new best friend.

Listen to today’s podcast and you will hear first-hand how an angel investor thinks about angel investing, you, and your great idea.  Specifically, you will learn about:

END_OF_DOCUMENT_TOKEN_TO_BE_REPLACED

QI-011: When Does Depositing A Batch of Checks Become Boring? | Interview with Joe Calloway, Performance Coach

How bored would you be if you had to make the same boring drive to your boring bank every single week to deposit yet another batch of checks that came in?  These are checks that keep coming because you are executing so well on turning your great idea into reality.  I’ve made that weekly bank run to deposit newly received checks.  I promise you, it never gets boring!  But how do you do it?  Is there something that raises the potential that you too get to make this wonderful drive?

To help you get into that same drive-to-the-bank routine yourself today, I continue the discussion I started in Episode #10 with Verne Harnish on what I like to call the basic, the boring, but the oh-so-critical building blocks of success.  To help me with this theme, on today’s show I am joined by author and speaker, Joe Calloway, as we explore all of this as well as his new book, "Be the Best at What Matters Most" (affiliate link).

As Joe likes to say, excellence is most frequently found by doing a basic set of functions well and consistently over time.  I totally agree with this and much of Joe’s perspective on what it really takes to succeed with turning your great idea into reality.  That’s why I invited Joe to come on the QI podcast.  I know from experience it’s this kind of thinking that goes far in setting you up for that weekly “boring” drive to deposits checks at the bank.

I freely admit that the sort of thinking I'm putting forth today is not trendy.  It's also not some fad pimped by a self-serving pseudo expert – Ugh, do I hate that stuff!.  All I can say is this is the most basic of common sense. That's why so many people, those second-tier wannabes, find it easy to ignore. Good, I say, let them ignore it.  You and I don't have time for them.

Bottom line:  I know from experience this building block stuff works.  Like I said above, I have made those weekly bank runs to deposit checks as a result.  Boy is that fun!!!

Listen to today’s podcast and you will hear about some of the most simple, yet incredibly powerful ways you need to think and plan as you execute on your vision.

Today you will learn about:

END_OF_DOCUMENT_TOKEN_TO_BE_REPLACED

QI-010: No Serious Entrepreneur Can Afford to Miss This Interview | A High Impact Hour with the “Growth Guy”, Verne Harnish

Today's show is a high-impact conversation with a well-respected thought leader from the world of elite and successful entrepreneurs, Mr. Verne Harnish.  In just one hour, Verne gives you some of the most valuable tools and techniques that any entrepreneur, startup, or idea person can immediately deploy for turning their great ideas into reality.

Many times you've heard me say that while every great idea starts with vision, passion, and excitement, that’s not enough.  At some point, it takes real work paired with meaningful discipline.  Yet, the demands on your time and resources can be overwhelming.  How you solve this can make the difference between taking your great idea the next step, or having it end up on the waste heap with all the other failed ideas out there.

Fortunately, there are a number of simple, yet highly effective, disciplines you can bring to your day-to-day that will dramatically raise the odds your great idea really does indeed become reality.  This is true whether you are the solopreneur just getting going, or you are further along.

Listen to today’s podcast and you will discover how some of the most successful people on the planet have, and still are, using many of the ideas Verne shares for turning their own great ideas into reality.  Specifically, today you will learn about:

END_OF_DOCUMENT_TOKEN_TO_BE_REPLACED

These are all affiliate links --

BlueHost is the best hosting service I ever used. Tech support is awesome.